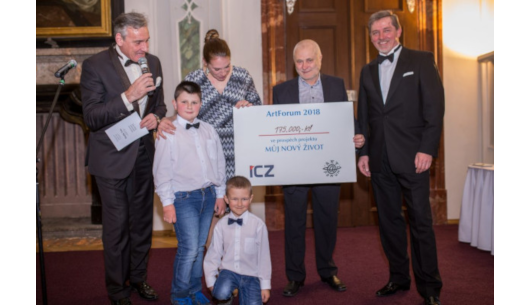 Prague, 28 March 2018 – On 22 March 2018, the Theresian Hall of the Břevnov Monastery in Prague hosted the twentieth charity auction organised by the ICZ Group and ArtForum virtual gallery. Thirty works of art by important Czech artists and photographers were put up for auction, and all of the proceeds equalling 578,000 CZK were donated to the ICZ Endowment Fund. Almost 175,000 CZK were granted that same evening to the My New Life project, which helps bring child oncology treatment patients back into life. The rest of the sum will be divided by the ICZ Endowment Fund in the course of 2018 to other entities to support charitable activities and public benefit goals.
The twentieth year of the fundraiser by the ICZ Group and ArtForum virtual gallery featured the traditional auction of 30 works of art by leading Czech artists – painters, graphic designers, photographers, glass makers and sculptors. Once again, the aim was to raise funds to help the needy in the field of healthcare, social care and more.
The cut glass sculptures titled “Pawns” from the Chessboard series by Vlastislav Janáček and the melted glass sculpture “Seraphine” by Jaromír Rybák were both auctioned off at the highest price, for 55,000 CZK each. The “Pawns” also broke the record in exceeding the starting price; by the end of the auction round, the opening bid of 2,600 CZK had been increased more than twenty-one times. The third highest price was generated by the “Nude” drawing by Ladislav Kuklík for 42,000 CZK.
The total yield from the auction, equal to 578,000 CZK, was donated to the ICZ Endowment Fund. The first donation to the needy from the newly raised funds was presented immediately at the gala evening by the spiritual father of ArtForum, Zdeněk Jirkovec, as a symbolic cheque made out to the author of the My New Life project, child oncologist MUDr. Lucie Hrdličková.
“It is the fourth time in a row that we have such received urgently needed funds to help our child oncology patients return to life within the fundraiser organised by the ICZ Group and ArtForum virtual gallery,” says child oncologist MUDr. Lucie Hrdličková, adding” “They will be used for popular sports, cultural and other activities, which spread positive information about these patients and allow them to integrate happily into society.”
“This year’s twentieth jubilee fundraiser has increased to amount collected to date beyond another imaginary boundary, to a total of 13,026,000 CZK.” “Immense thanks for this are owed primarily to all our friends at the ICZ Group, our partners and other guests, who regularly and tirelessly help a good cause,” says Bohuslav Cempírek, Chief Executive Office of ICZ a.s. “In addition to supporting charitable activities and public benefit goals, such as helping those with medical disabilities and especially children, all of the raised funds will be directed towards developing culture, science and education.”
The gala evening also included a musical performance by the Puella Trio ensemble and the drawing of winners in the charity raffle, to which the AJETO glassworks contributed three glass sculptures. The auction was directed by the president of the Antiquarian’s Association Jan Neumann, and the evening was hosted by moderator Jan Čenský.
More information is available at the website: http://www.gallery.cz